A First for Everything: Behind the Success of our First Paid Networking Event

I am beyond thrilled with the turnout of our second major networking event Vimy and I hosted along with the help of our new Business Development Manager, Nancy for our Boss Babe Imperial (BBI) community.

For those of you who have not been following me on my journey, here’s a little recap of what Boss Babe Imperial is. Vimy and I started this community last September and officially launched February of this year as a pilot project because we wanted to build a space for women to feel empowered, inspired and connected while growing and learning together. We wanted to create a space for female entrepreneurs and aspiring entrepreneurs who valued community over competition and needed help and support for their own business ventures.

Fast forward almost one year later, we have grown into a community of over 200 Facebook members! A huge milestone for us. What started as a fun pilot project that two best friends wanted to start together turned into something much bigger than they had ever imagined.

Planning for the Event

There was a ton of planning to do prior to this event. It was actually our first ever paid networking event and we were skeptical on how the demand for the event would be. Much to our surprise, we were able to gain considerable interest for this event and many people ended up buying a ticket. However, there was still a lot of content marketing involved in the process and we actually had to reach out to people through DMs to remind them to buy their tickets and bring about more awareness.

There was definitely a ton of work involved in the marketing process but we managed to pull through. It’s not like you post the event and people will come flocking to buy your tickets. No, there is a ton of content creation, time management and strategy involved. With the help of my team members, we were able to effectively pursue a working strategy that brought more interest to potential attendees. 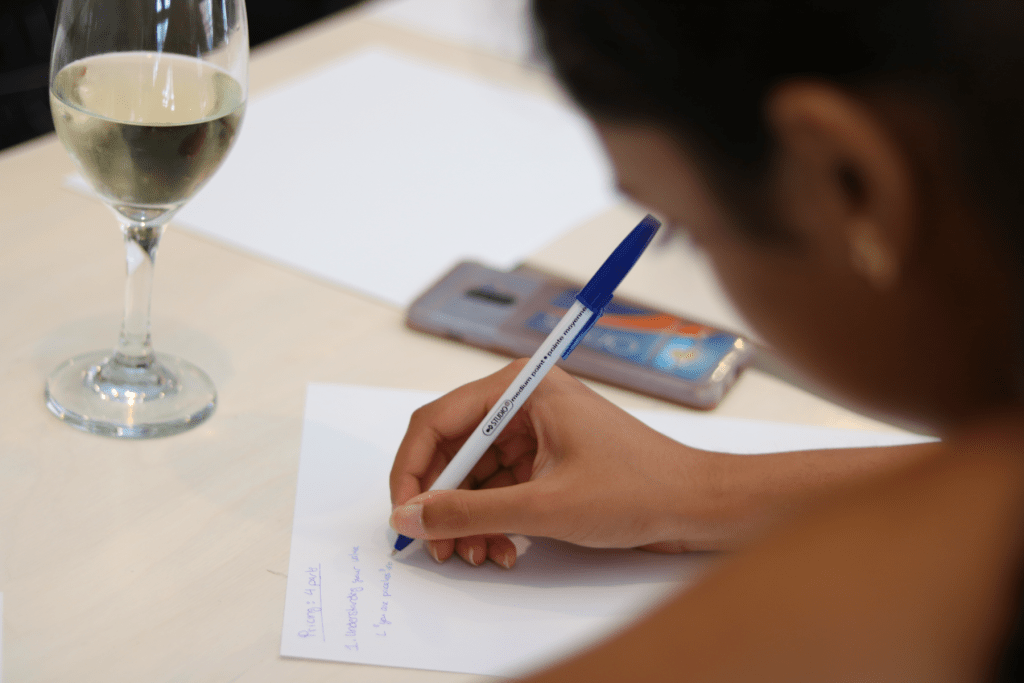 With a new change of plans and me moving to Toronto in the next couple of weeks, I knew we had to get someone else on board to help us run BBI while I wasn’t here. Luckily, Nancy reached out to help us carry out the vision of BBI through her position as our new Business Development Manager. With a new team member on board, it has been a lot easier to run events with a fresh new perspective on board and bring in new insight on how to effectively carry out our vision. 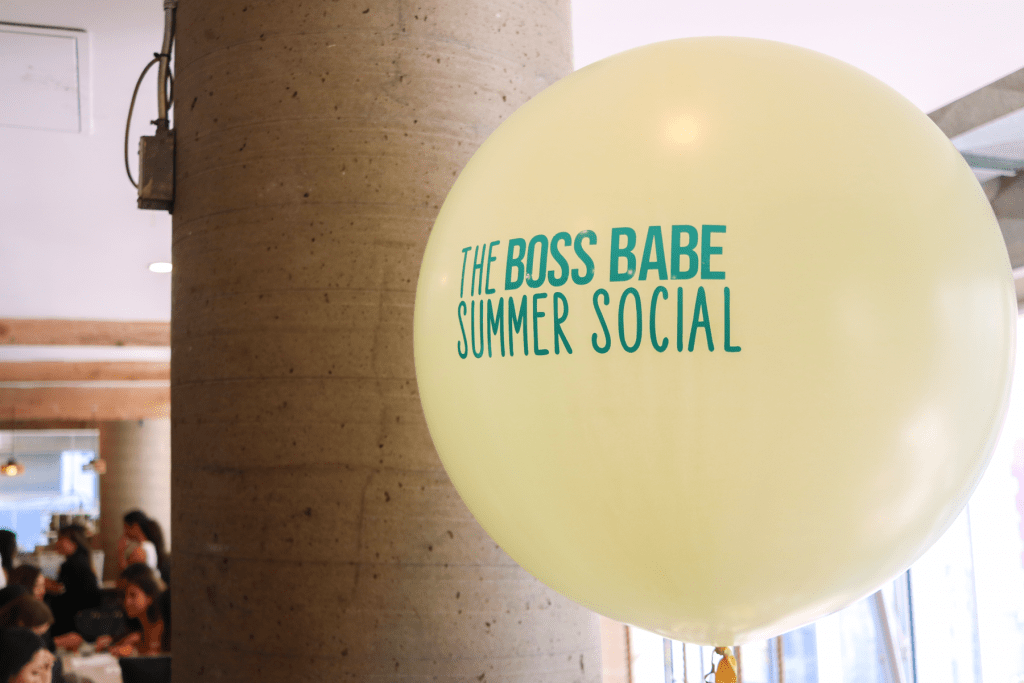 With every major event we host, there’s always something that goes wrong. Even with the last event, there was a snowstorm that day and only half of the girls were able to make it. But the ones who did had a blast and that allowed us to really kick start BBI.⁠

To be honest, I haven’t spoken in front of a crowd since Bossbabe.mtl’s Influencer brunch back in March. So I was extremely rusty. The moment it was time for me to start off the event by introducing myself along with BBI, I flopped considerably. I didn’t even say my name nor introduce myself and right away started talking about BBI and who we were. I had even written cue cards ahead of time and tried to prep myself on the day of (didn’t end up using the cards at all).⁠

We were also promised the venue an hour in advance in order to set up but there was a misunderstanding. When we arrived at 2 pm there were a bunch of people upstairs. We were forced to prep everything downstairs on a small table and ended up shattering the glass of one of our frames.⁠

Soon after the event started, we had a difficult time trying to keep ourselves organized.⁠ People came all at once and we immediately felt the overwhelm as each and every one of us ran around the room trying to accommodate to everyone’s needs and make all the ladies feel welcome.

We also didn’t eat prior to the event so we were all running on empty stomachs (never ever do this!!). I had major brain fog and felt at one point like I was working as a waitress all over again; giving out name tags, greeting people as they came in, providing bingo sheets while trying to take photos.

My brain basically froze and I couldn’t think properly during the event. Everything kind of became a blur, I couldn’t even concentrate on the the speakers who were delivering great value to the audience (probably because I didn’t have food to fuel me). All I could focus on was taking the photos and that was about it. Note to self: I can’t concentrate on more than one thing at a time especially when it comes to hosting an event and taking photos.

The event itself was a huge success despite everything that went wrong.

The first 10 attendees who arrived were rewarded gift bags. Inside these gift bags included a Les Dames Vintages eco-friendly tote bag & gift certificate, an eco-friendly food wrap by Le P’tite Fabrique, a gift certificate by Vita Vie O Max, a conditioner and shampoo by Bulles et Baume and a lip gloss or eyeshadow by Zao Makeup. Special thanks to our sponsors for the gift bags as well as XO Essentials for gifting every single attendee with an essential oil roller upon leaving! We also want to shout-out to Minima Basics for gifting their brand new acrylic desk organizers as a contest giveaway and BalloonBabeMTL for the beautiful customized balloon for our event.

We settled on the “Human Bingo” ice-breaker game to start off the event to get the girls interacting and getting to know one another. Every attendee was given a bingo sheet and within every square, there was a mini description such as “someone whose been to a work jam” and the girls had to write the name of the person they found that matched that description directly underneath it.

We explored many different types of ice-breaker games and this one seemed to appeal the most.

After the ice-breaker game, we had our first speaker Samantha Kris come up front to present an amazing speech on how to value and price your worth. Next up, we had Katie DiCaprio (also known as MTLKatie on Instagram) give advice about how to find influencers to work with and how to make sure they are good for you.

After our first two speakers, we split up the audience into teams and had each team compete with one another through conducting fun and interactive mini workshops to challenge their entrepreneurial spirit. We asked each team to come up with the best captions for some photos and email captions based on the scenarios presented to them. The team with the best answer was given a special prize.

Finally, we had our first ever panel speakers with Katrina Tioseco and Alicia Waid; both inspiring boss babes who left their corporate job to pursue their own businesses full-time. They both shared their story to the audience as well as their experience working for themselves.

It was an amazing event with 4 incredible speakers; Samantha Kris, Katrina Tioseco, Alicia Waid and Katie DiCaprio. Each who shared their extensive knowledge and expertise to the BBI community.

My biggest lessons learned: Never try to host an event AND be the photographer all at once. Hire someone else to do it, concentrate on ONE thing at a time and make it extremely clear who each team member’s tasks are.⁠

All in all, everyone had a blast and I’d like to thank each and every one of you for your continuous support. You are the reason we continue to host these events.

Despite all that, everyone still had a great time.

It also really helped give our brand more exposure and awareness. A ton of new boss babes joined our exclusive Facebook group, followed us on social media and joined our email list as a result of our first event. We’re super excited to plan the next one for the girls. So if you’re in the Montreal area and you’re a female entrepreneur, aspiring entrepreneur, influencer, blogger or business professional we invite you to join our private Facebook group, follow us on social media (Instagram & Facebook) and subscribe to our mailing list!

Hope you can join us on the next one!

FeiModern is a creative studio that offers web design and branding for upscale coaches and speakers who are passionate about serving other women. We work with purpose-driven, self-identified women thought leaders, coaches and world changers who are fired up about making an impact and helping other women succeed. Our mission is to lift and empower women worldwide to build thriving businesses and help them feel confident in their ability to show up, raise their prices and charge their worth.

3 tips to position yourself as a premium coach

Higher-end opportunities and clients require more credibility from you online for you to rise above the competition. For clients to pay you a premium rate,

How to build a memorable brand

Building a memorable brand is essential for any business that wants to create a lasting impression with its customers. There are many factors to consider

How to stand out as a coach in your industry

The coaching industry has become a highly saturated market. There are literally thousands of other coaches out there either doing the same thing as you

5 signs you need to rebrand

Many people say they want to ‘rebrand.’ And by rebrand, most of the time they mean they want a ‘new look’ (logos, colors, fonts, etc.)

A comprehensive guide uncovering the 5 foundational elements to a solid brand strategy to ensure the long-term success of your brand.